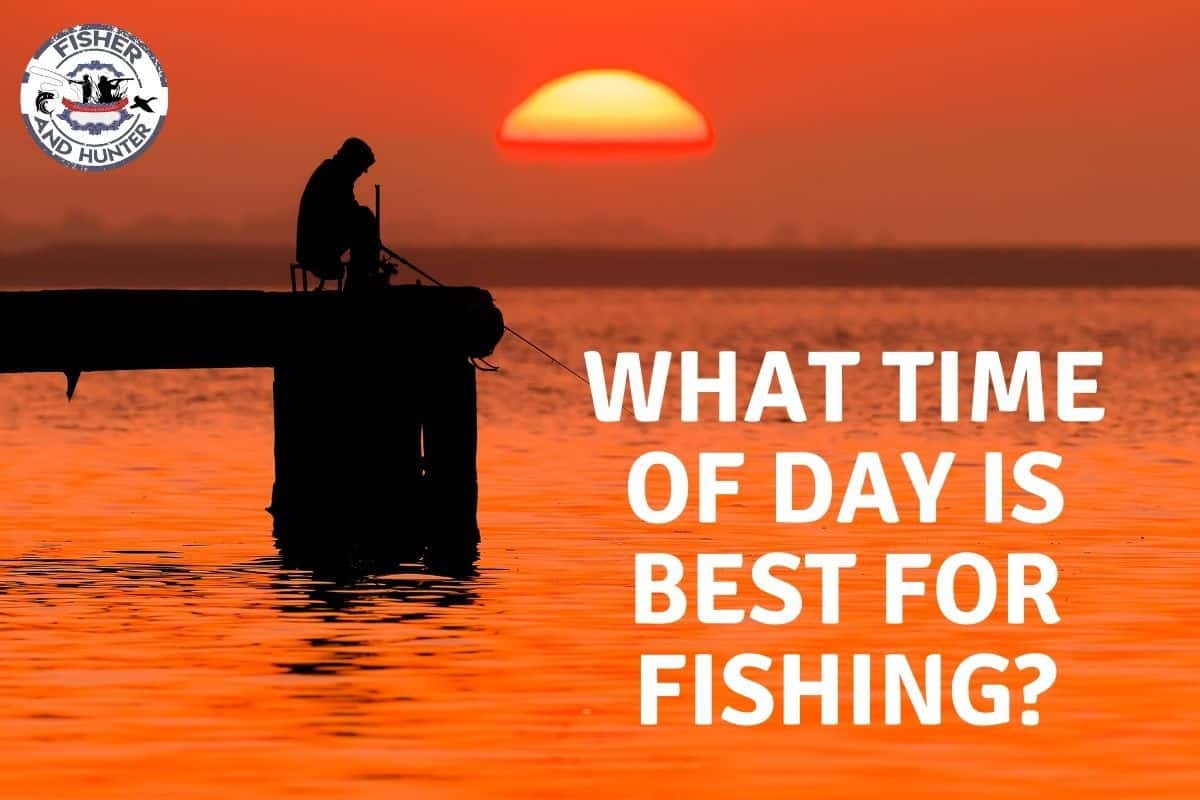 When I caught my national record trout in 1994, it was a few minutes before sunrise in mid-July. The highland winters in the Southern Hemisphere can be brutal. The ice was forming on my line as soon as it came out of the water. My biggest brown trout of almost 14 pounds was caught in the rain as the sunset, and while both were incredible experiences, you might wonder what time of the day is best for fishing.

The best time of the day to fish is before sunrise and at sunset. Fish are at their most active as the sun rises and the sun is about to set between 4.30 to 8 am and between 5 and 7 pm. Usually, there is a lot of insect and aquatic prey activity at these times, helping lures blend in.

Because fish are cold-blooded, their behavior and feeding patterns are greatly affected by the water temperature. Fish like trout, bass, and walleye typically present two very visible feeding schedules where they will break the surface in a frenzy to gulp up mayflies or dragonfly nymphs about to take flight. Then, during the mid-day, fish will retreat to the deeper, colder parts of rivers or lakes to feed on the bottom. In this article, we explore what time of day is best for fishing in more detail.

Why Are Fish More Active During Sunrise And Sunset?

Which Fish Are Typically Diurnal?

Which Fish Are Typically Nocturnal?

There are exceptions to the behavior of the diurnal list.  However, some of the larger fish in these species will venture out at night to feed. In addition, many trophy fish have been caught during a full moon using a Senko lure.

Knowing which fish are most active will significantly increase your chances of landing a few with ease. In addition, because fish are in a feeding frenzy, they are less picky, and their guard is down, so if you can match your fly-lure, spinner, or spoon to whatever they are eating, you will be guaranteed to catch.

Many anglers have caught the biggest fish during the sunset feeding time. However, it is common to catch trophy size fish during a full moon. The reason for this is that the water temperature cools down, and the larger, more skittish fish come out of their hiding spots to feed without fear.

In my personal experience, having caught the biggest brown trout in all the years I’ve been angling, it had just turned dusk at around 5.20 pm and during a heavy downpour. I used a 9′ Daiwa rod, Hardy reel, and a small black nymph boobie on floating line casting at an angle against the wind and rain. Suddenly, the trout ejected out the water and came down on that lure with an almighty splash, and the fight was on.

It took me almost 45 minutes to bring it to the shore, by which time the only light was from the Maglite torch clenched between my teeth. Upon inspection of this magnificent male, I noticed the reason for our extended tango. When the trout launched out of the water and crashed down, he got hooked just behind the dorsal fin. As I let him swim back below the black water, I thanked him for giving me the fight of my life.

Diurnal fishing will produce a steady number of successful fish if you imitate what they are eating and if you are consistent. The secret to success in angling is the ability to adapt your lure, casting, and retrieving techniques rapidly. When you start to see the familiar rises making ripples in the water and the odd jumper here and there, your line should be wet. Most anglers will agree that fish will stop feeding just as suddenly as they start.

How Can You Catch Fish During Midday?

You can effectively catch fish during midday by using bottom fishing lures like Senko, mid-water spinning lures, and jigging. That can entice and trigger the larger, slower fish that typically hide in the cooler, deeper water to feed and strike the bait without hesitation.

Which Are The Best Lures For Midday Fishing?

If the water is murky, go for lures with a copper spoon and yellow, green, orange, and red flash. For the more transparent water, use neon colors, silver, pink, white and blue flash. Fish have excellent eyesight and are attracted to bright colors.

What Is The Best Technique For Sunrise Fishing?

The best technique for early morning or sunrise fishing is a slower approach to reeling in the lure.

Fish are a little more sluggish in the early morning, so pausing for a few seconds while you reel the lure will create a more exciting prey for the fish.

After you pause for a few seconds, you can do a 2-3ft rod sweep to the side of the top. That should bring interest to the lure in no time. The best way to fish during the early morning or sunrise period is:

What Is The Best Technique For Sunset Fishing?

The best technique for dusk or sunset fishing is usually mid to topwater lures with various lures. In summer, the water will be warmer, and light will be much longer into the evening. Most fish will feed on the top, sucking in mayflies, mosquitoes, dragonfly nymphs, or tiny frogs.

Lake fish are more active in the evening and tend to strike the lures much harder. For this reason, you can speed up your reeling in, and no need to pause in between the 2-3ft sweep while jigging.

The best way to fish during the dusk or sunset period is:

There should be no doubt that the best time of the day to fish in is at dusk or sunset. This period consistently produces bite after bite, and if you are willing to sit it out, you might land a trophy-sized fish to talk about during a full moon.

While not unproductive, the midday and morning period requires a different approach and lures to entice fish to bite.

if you are looking for a few more pointers on how to get the best of your fishing during those early mornings or late afternoons then you can check out this article as well 🙂 It offers some advice on how to fish at these productive times.