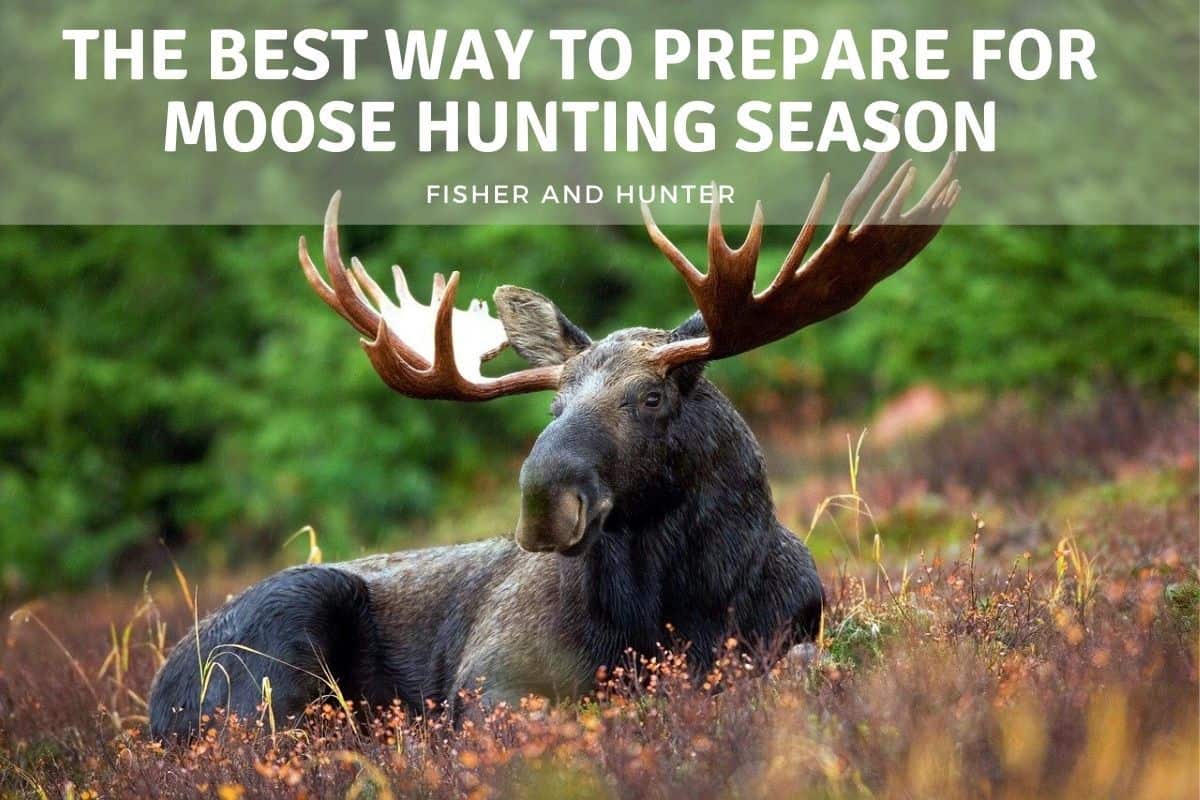 The moose is one of the biggest animals you can hunt in North America. The best time to find them, is during their mating periods. Female moose are easier prey than males because they aren’t as quite as alert or strong. However most hunters are after a big bull moose for that once in a life time hunt.

Hunting for moose is often the pinnacle of a hunter’s life. It takes considerable preparation to hunt these magnificent animals. You will need the correct firearms, ammunition, clothing, tracking, calling equipment, and safety equipment. However, the most important aspect will be training and experience.

The antlers of moose can spread up to 6fts and can weigh about 70lbs They are amongst the biggest game in North America and successfully hunting one can prove to be the greatest thrill. They vary in sizes depending on the location. As you extend to the furthest North you will get bigger moose.

The population of moose seems to be on the decline in certain states of America and is becoming harder to locate for some hunters. The demand correlates with demand which is growing at a rapid rate causing limits and restrictions to be placed on numbers. To hunt for these huge animals you will have to prepare in advance and we have some of the best ways to prepare for the upcoming moose hunting season.

If you’re looking to hunt moose this season, the first step is finding a location. There are 15 states in America that have indigenous moose populations and they stretch from Washington all through to Wyoming, Maine up into Michigan (the furthest northern state).

If we go north to Canada and onwards there’s an estimation of about one million moose that can be found around the large water bodies and forests with some popular locations being Alaska or parts of Ontario – so pick your favorite spot and get hunting!

After Canada, if you want to head that far North, Alaska is the best state for moose hunting. Followed by to Maine, Idaho and Washington. Though we have included a table below with the states that allow moose hunting. Moose hunting can be expensive everywhere though – it costs thousands of dollars

You need permission from your country’s states or regions wildlife agency before applying as they regulate how many licenses are available on an annual basis in each region (both for the moose population and to reduce to many hunters in one place).

Applications must usually been made months ahead of time but if you’re lucky enough to win one through ( they often allocate places through a lottery) Remember, its not a cheap option, from accommodation, equipment and application fees it can head North of 10,000 dollars very quickly.

When you go hunting in the state, it is important to know what specific regulations are. Different states have different laws that can make a huge difference on your hunt and how long or successful it might be. For example, Minnesota has recently had their moose population decline and canceled all hunts to allow for populations to recover. As frustrating as this can be it has to be remembered it is to maintain the sport, and the population.

Moose hunting in Maine is a difficult process and requires some advanced planning. Each year, the state of Maine holds a lottery to award permits for moose hunting; The odds of securing a spot on this can vary due to factors like population size, number of applications etc. In New Hampshire, winning odds were 1:36 which are much higher than other states nearby such as Vermont at 3:250 opportunities per season!

Where ever you plan to hunt make sure you head to the relevant authorities sites to make sure that you both follow the guidelines and know how much of a chance you actually have to get on a hunt. You can always apply to a few to try to maximize your chances.

Aerial maps can be a helpful tool for moose hunters as they may help you find the right area to hunt in. Some state governments provide aerial map guides which will reveal where populations of local moose are and how many there are, saving time hunting while also being eco-friendly.

Alternatively, an experienced guide could coordinate everything with your accommodation needs so that all equipment required is available at hand before heading out on the trip – this way it’s guaranteed not only to save money but make success much more likely.

The best time to hunt moose is different depending on where you are. The season in Canada for example, usually begins at the end of August and ends a few days before September when they rut (mating season). It’s important not only to know the habits and behaviors of animal you want to go after but also where they are likely to be at this time. Seasons can only last a few days and you don’t want to waste that small amount of time.

Like a lot of game animals, moose are most active in the morning and evening hours. The best time to hunt them is during these periods when they’re looking for food or water – but don’t forget about midday hunting! You may find them resting up, and your stalking skills can be put to the test!

Have The Right Personal Gear For Hunting

Moose hunting is a task that requires you to have the right gear. The type of gear varies depending on where and with who you are going moose hunting, but there are some common essentials for everyone: binoculars, ammo or compass (and GPS if possible), camping supplies like food and water filter system. You can check the links for our Amazon recommendations.

Clothes appropriate for your surroundings such as camouflage clothing in forests during summertime when it’s not too cold out yet; camo callers which imitate an animal noise so they can lure one near them – this also makes sense in areas without many trees because animals may hear their calls more easily from long distances away than people will be able to see their movements. Make sure any weapon has been cleaned before use! You don’t want to discover you missed that step in the middle of a hunt.

The downside is that it takes longer to reload than other guns, which could be dangerous when hunting. For beginners this may not matter as much because they’re unlikely going after a large game animal like moose and will probably need more shots in the woods anyways!

Semi automatic rifles are also popular among hunters for their easy use (just pull back on one of two levers) without sacrificing accuracy or power compared with bolt action firearms – these weapons fire bullets at an extremely high velocity due to recoil control mechanisms built into them by design; allowing you get off repeat rounds quicker if necessary while still being able]y aiming your shot precisely where desired before firing each round.This type rifle can quickly empty its magazine clip so make sure you have spare.

What Ammunition For Moose Hunting is Best

When hunting moose you should be aware it is a big powerful animal . You’ll need to make sure you have the right type of ammunition for moose hunting. .338 250 grain rounds are good but be aware that they can go through trees and hit another animal in your line if aimed poorly so use caution when shooting at a distance from other animals or people

Ammunition should not only take into account how powerful it is, there’s also weight which will affect accuracy as well; lighter bullets tend shoot straighter than heavier ones If 350gr bullet travelling outwards with 1000fps speed then we’re talking about an energy level on 130ft pounds (500 joules) – this has enough power behind them usually kill deer-sized game without much trouble while still being accurate over long ranges!

When you hunt you are goign to be out side for extended periods of time .

The best thing to wear is comfortable clothing that’s not too tight or loose, and it should be made out of materials like cotton so you don’t get cold. You also want clothes that’s easy for movement in case something happens while hunting like slipping on rocks which could happen easily due – rain can make trails slippery especially when wet with dew)

It’ll help keep your body temperature regulated if wearing layers; one layer will cool off faster then another but still protect against moisture from sweat.] There may be times when you are stationary for a long period of time, some padding on joints will make this more comfortable.

This is up to you, you can camp (if allowed) or stay in a hunting lodge. It really depends on the experience you are looking for and your budget. Camping means you are closer to nature but staying in a lodge means less effort with cooking and more time to hunt.

I would recommend camping because you can get closer feel for the wilderness but if camping doesnt appeal and your budget is tight I suggest staying at an average hunting lodge which will still be very rustic!

Am I Guaranteed to Get a Moose When Hunting ?

No, but you can increase your odds by following these tips! If the hunting area is large enough to distribute moose evenly, then there will be a higher chance of finding one because they’re not all crowded together. Heading North to Alaska, Canada or Northern europe will increase chances due to sheer numbers.

Also seasons are often 4-5 days long with a break. If you are able staying out closer to the action and for more days this will increase your chances as well.

Be In Shape And Focused

Moose hunting is a physically demanding endeavor, so it’s important to stay in shape. In order to be successful moose hunter you need the stamina and strength necessary for long hikes through rough terrain and enduring cold weather without complaint.

Doing cardio exercises like running or walking are good ways of getting your body ready before going on an expedition for this noble animal that can provide many pounds worth of meat. Of course you can then eat it and get outta shape again before the next hunting season!

Moose are certainly a big ticket hunt, both in actual size of animal and in the cost that can quickly accrue when setting off to hunt for these largest of deer. Still, they are a prized trophy for many hunters and the process of hunting them is not without its challenges.

The best moose hunters will have understanding more about their environment including size (both physical dimensions as well seasonal changes), knowing where to find these animals in order be successful at tracking down your prey on foot. equipment you will need for a extended period outside.

If you are a novice it is certainly worth thinking about having a guide come with you on the your first trip, both for your safety, the safety of other hunters and of course for the moose you are hunting as well.

Good luck out there!!