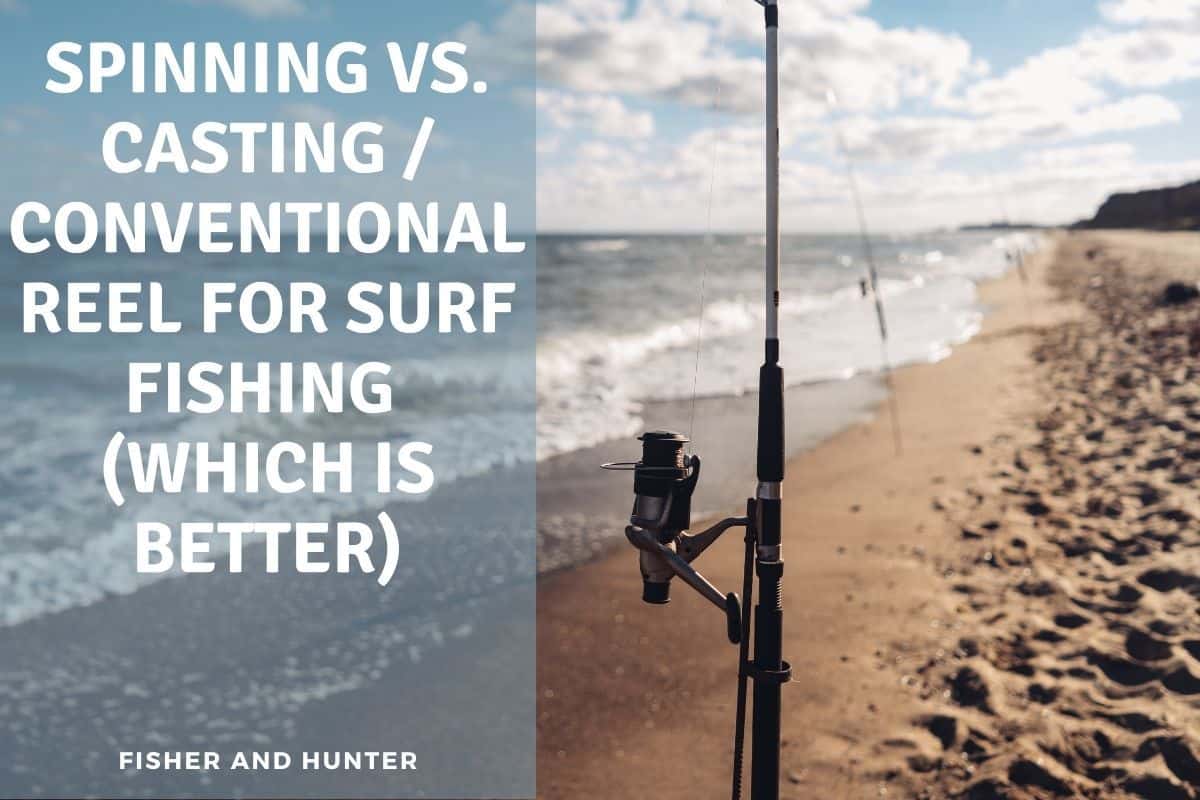 It is often hard to decide, choose or know the type of reel is suited to a particular fishing style. There are so many, and it seems to be added to weekly. Drop fishing, shore, boat, float, bottom, jigging, trolling, surf, rock, kayak even jetski. This list seems to be added two on a weekly basis.

Luckily despite this list there are still two reels that are used for the majority (except trolling) these two fishing two reels are the spinning reel and bait casting or conventional reel. Each have their merits depending on the fishing situation. Here we look at which is better for surf casting.

Lets take a look, very briefly as this has been done elsewhere, at the differences between the two then we will get into the meat of which one performs better. If we can – as this question has caused riots on fishing forums for years!

If you know the difference and want to jump ahead to the comparison table just press here and we can jump you there.

Depending where you are in the world, Europe and Asia especially, the spinning reel is the mainstay of most anglers tackle. It is suitable for heavy duty work and durability, most are made from aluminum to make them lightweight and corrosion proof. Cheaper version can be made from graphite, these tend to be less durable. A decent spinning reel will be suitable for a lot of general use fishing.

Spinning reels use a fixed spool that wraps the line gets wrapped around repeated and comes of the side as its cast out. This is controlled with a flip bail arm which can be used to respool the line. The spool moves up and down the reel to allow the line to be distributed evenly along the spool.

The Bait Caster or Conventional Reel.

Bait casters use a different method to release and retrieve line. It is directly spooled back as the handle winds and is stored evenly on the spool by moving across horizontally. They offer more control, and if used well more accuracy than a spinning reel. However they do take

There is learning curve with bait caster, and for that matter spinning reels, but the main difficultly beginners face with a bait caster is the use of the thumb to control the line while casting. Too much pressure and it will reduce your cast length and too little and it will create a bird nest. (where the spool turns faster than the line is released) and this is not fun to sort out at all.

These reels can be found ofr under 100 dollars with pretty decent features, or the top end of most peoples price range in brands like Shimano.

A full description is going to take a longer article and you are here to find out which works better in Surf casting situations. So lets take a look at that.

Does a Spinning Reel Cast Further Than a Casting Reel?

The short answer is no it doesn’t. There is additional friction from the line coming off indirectly, and rubbing against the spool as it releases. However there are so many variables here that a complete answer is not so straight forward. The action of the rod, weight of the lure or sinker, how powerful you are, what grade or type of line. All of these will have significant impact on your casting distance.

All these things being equal a conventional reel with its reduced friction will get bait and terminal tackle out further though. If you have the skills to handle it.

Even with this pretty controversial statement, there are exceptions as well. Fishing Reels are not all created equal, and especially in the last few years, there have been some very good casting spinning reels appearing on the market. We will highlight a couple below for you to cast (ha!) your eyes over but be warned they tend to be at the higher end of the market. However reels from Penn and Daiwai have started to appear hanging off the bottom of rods on beaches all around the world.

They all have some things in common to help them deal with the wear and tear of surf fishing, and the fish that may be targeted.

Drag: All surf reels have to have a decent drag on them. Spinning reels were usually lighter than casting reels and were not so suitable if you hooked into some monster at the back of the surf. This is now changing. The two Surf spinning reels linked to above ( and below) have 60lb and 33lb drag at their largest sizes and this is way more useful in the surf than at the local lake.

Water / Corrosion Resistance: Although its a fishing reel and will come into contact with water regularly, at least through the line / braid it is still susceptible to corrosion. ( make sure you wash it out after each use) Spinning reels at this price point and aiming at surf anglers are going to have some degree of waterproofing to assist. They are also going to be made of aluminum to prevent salt water corrosion.

Yes we said it, and half of the sur fishermen said yes we agree, the another half, well politely, they don’t agree. Conventional reels have a slight edge over spinning reels, even at the high end of the market liek the ones highlighted below and above.

But its nto totally cut and dry. There are some areas that spinning reels shade the advantage and others where bait casters do.

Casting reels are likely to cast further on average than a spinning reel, simply due to the lack of friction. However they are better with heavier weights rather than lighter weights

Casting Reels are more fragile and susceptible to sand and water damage, as mentioned above spinning reels can come with water and dust resistance. Using them on windy beaches might mean they last longer than conventional reel.

Advantages and Disadvantages Of Spinning and Casting Reels For Surf Fishing.

Well this is a touch one, so jsut to sit on the fence and maybe lean a little to one side We will recommend one from each camp. Neither are that cheap however we recommend the Penn Spin fisher (choose long cast) when push comes to absolute shove we want something that although may be 20 yards less in casting distance, comes with corrosion and dust proofing in our spinning recommendation.

It is also designed for long casting so it may mitigate some of the other issues that spinning reels may face for surf fishing. 10 turns for oscillating the spool is reducing friction!

In the bait casting world ( or conventional if we are being accurate) then we have some thing a little out of left field. We could throw a Shimano in here, as they are consistently excellent. However casting reels are the bread and butter of Abu Garcia in the Bass world. So lets take a look at the Ambassadeur Blue Yonder. 15lbs of drag is a little less than we would like, but 300 yards of 30lb line isn’t to shabby. It has a price point to match a Daiwai or Shimano though, so if you are just thinking of experimenting with surf fishing it may be worth looking at the Kast King fishing reel above to try out first.

We didn’t really give you a definitive answer because frankly there isn’t one. It really does depend on your set up and skill level as well as your preferences. We would argue that your rod is the main engine to your casting and the reel is secondary.

The simple answer is that both work really well. Spinners are perhaps more familiar to you, and more suitable for beginners. Bait casting will get you a little more distance but at the risk of birds nests.

Which ever way you go you will need a decent drag on your surf fishing reel as the fish that hang about on the surf line tend to have some power and weight to them. This will all add to the enjoyment of the fight though!!

One thought on “Spinning Vs. Casting / Conventional Reel for Surf Fishing (Which is Better)”

link to How Big Are Fishing Kayaks? (With Length, Weight and Width Examples)

he average single seat fishing kayak is around 11ft in length. Fishing kayaks can range from 8.5ft up to 17ft for tandem designs. Longer kayaks are faster through water, and shorter are more...

Continue Reading
link to What Are The Best Tides To Fish?

Rising and falling tides are statistically the best tides to fish. Rising tides bring cooler waters, and increases in oxygen, outgoing tides will take bait and nutrients out to fish