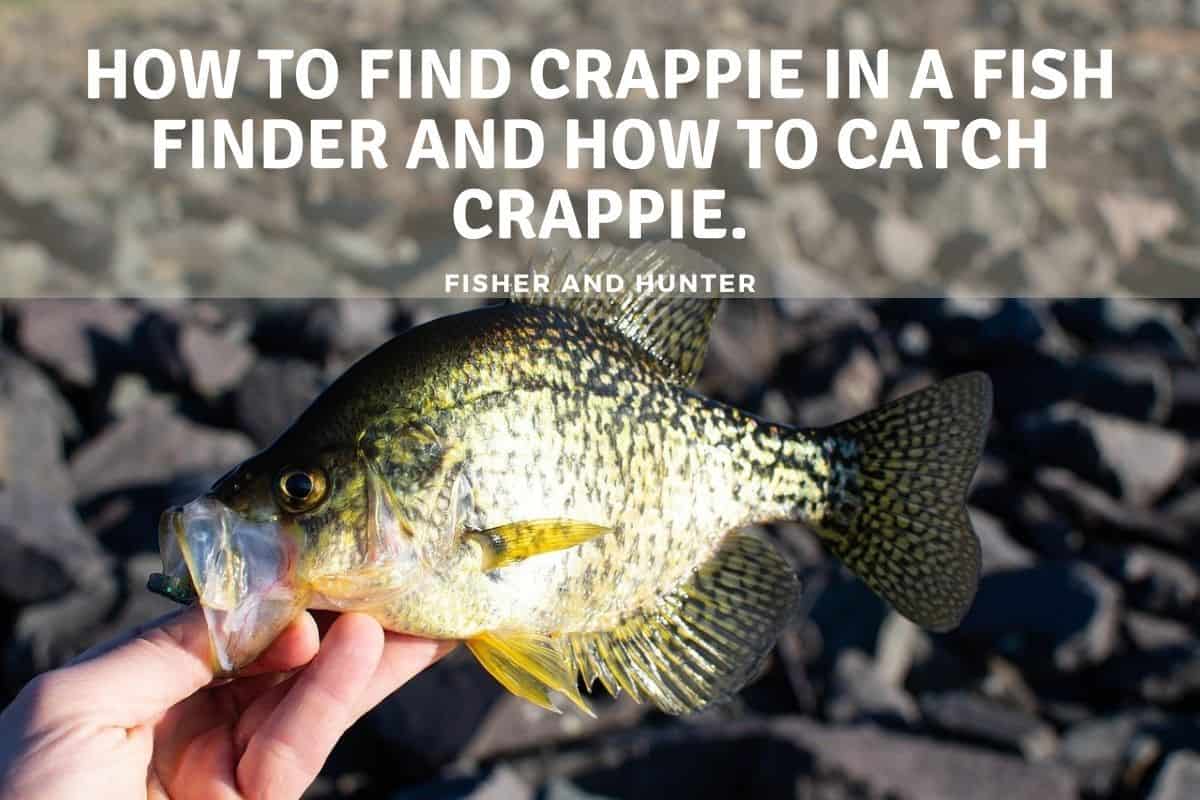 Crappies are one of the most popular target species of fish in North America. Did you know that there are two species of crappie? They are the white and black. The white crappie has the same color as its name but the black crappie has colors similar to silver-green. Although they can be caught without a fish finder, if you use one it can help to get you on the fish quicker and for longer.

Crappies, are one of the tastiest and most fun to catch fish and are also among the easiest. If you want an easy time fishing for crappie then it is useful that you know what they like: warm water! So warmer temperatures like summertime make perfect conditions for catching these tasty gamefish.

Using fish finders to identify crappie and where they live will improve catch rates substantially. Locating changes in depth, water temperature,  bottom make up and finding hard structures will allow you to cast bait and lures where crappie live and feed. Fish finders offer all this information and more.

If you have a small bass boat or fishing kayak and want to catch these little fish to use as live bait or food, one of the better and more effective ways to get on to the fish is to use a fish finder and spot the shoals. However, it takes a little practice to get used to using these to spot them. We have a few tips to help you out here both with catching them, and with spotting them on a fish finder.

The crappie fish is a popular freshwater game fish that can be found all over the United States. The crappie has an average size of two pounds and can grow up to six pounds in weight. Crappies are typically caught with live bait, though some fishermen may use artificial lures such as spoons or jigs.
Fishermen should know where to find these fish before starting their fishing trip because they prefer murky water with structures on the bottom, like sunken trees or brush piles.

Bait is one of the most important things to consider when catching any fish, especially crappies. They like eating worms, minnows and other smaller creatures. Anglers often use many different types of bait for crappies such as worms, nightcrawlers, shad guts or even marshmallows!

One type of bait that’s been proven successful in catching these elusive creatures is cornmeal doughballs with a little bit of garlic powder mixed into it.

Crappies liek structure, which is why a fish finder can come in handy. One way is by slowly and carefully dropping a line at the edge of any large structure found in your body of water – like tree branches or docks- while baiting it up for crappies that are looking out from their hiding spots. Your bait should ideally fall freely down into the depths below. If not, then try again until eventually one sticks near an edge close to where crappie might be lurking.

If you have no luck with your fishing, try placing the bait one foot higher and see if that improves the bite. as mentioned they like warm water. ( reason two why a fish finder can help – it can show you thermoclines in the water as well).

Changing bait and styles will also help, as it does with all fishing, but if the fish are there it is likely you will hook into them, and if you get one then more are likely to follow.

Crappies are most easily caught in spring and fall where the temperature is warm which stimulates crappie to feed more. You may also find larger male crappies in shallow water while female crappies go to deeper water during early summer time of year to lay their eggs when they’re getting ready for winter season. Crappies like structures very much such as rock piles or fallen trees. They are prey for pike, musky, large mouth bass and others so they like to be close to bolt holes. Use a fish finder to locate these under water structures and the fish on the line will surely follow.

How to Find Crappies Using a Fish Finder?

So you have the basics, you have read ( a few times) how a fish finder will help you locate crappies, and now you have your Garmin or HumminBird set up.

Crappies are hard to find because they swim deeper than other species. However, using a fish finder can help you locate them easily and quickly! Electronic  fish finders will give real-time scans of nearby water that allow for easy locating of large groups or individual fish within the scanned area including crappies

How to Find Crappies on a Fish Finder

If you are not sure which model of fish finder to buy we have an article cover most of the decent modern ones on the site as well.

Finding Crappie with Side Imaging or Down Imaging

There are two common types of fish finders. These are the side imaging and down imaging sonars. The difference between them is that using a side-imaging would allow you to see what’s on your left and right as well as in front of you, but it won’t give detailed images like those from a down-imaging sonar when looking at life below the surface or underwater objects such as reefs (which could make for great fishing spots).

What Other Fish Live With Crappies?

Crappies are a freshwater fish that usually live in lakes. Crappies can be found all over the world, but the largest populations tend to reside in North America and Asia. They often swim together with other fish species such as sunfish, perch, walleye, bass and catfish. So when you target them you may also hook into other species.

What Gear Do You Need for Crappie Fishing.

Crappie are not specialist fish. You can catch them on most set ups. most anglers prefer a light spinning rod and reel set up.

Crappie gear consisting of a light spinning rod and reel, will cover most situations, for baits some jig rigs with insect plastics or even live worms, split shot to bring the lure and bait into deeper water, size 2 to 4 hooks and some floats will target crappies wherever they are.

The links above and below from Amazon will serve you well if you need them.

A fish finder can help you in so many ways, although nothing replaces local knowledge. However, on new waters, looking for structure and bottom changes are the most important aspects. Fish finders will certainly help you identify these. As mentioned your tackle doesn’t need to be heavy at all, crappies grow to about a maximum of a 6lb fish of over 12 inches and these are very rare. You are likely to pull up fish in the 2lb range, although it may seem small these small to medium fish are in our opinion the tastiest! There is always a silver lining!