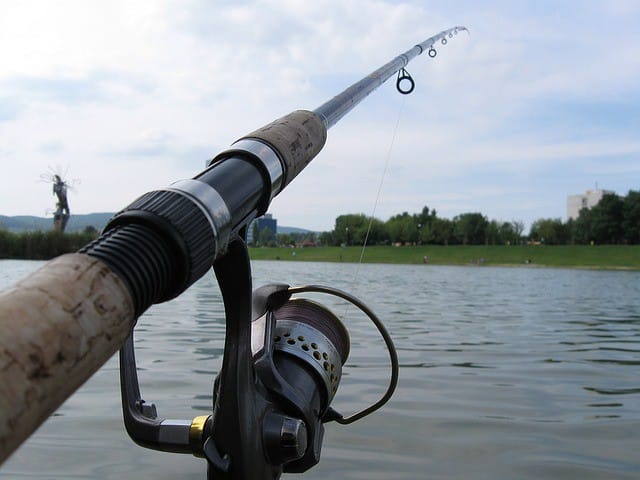 Usually, a spinning reel works best on a spinning rod and will depend on the type of fishing you engage in. If you opt to use a  spinning reel on a casting rod, you should be aware of a few challenges.

Most anglers may agree that attempting to use a spinning reel on a casting rod may be possible, but it can be very uncomfortable and risky.

First, let’s explain how spinning reels and casting rods work, so you can tell the difference. The parts of the spinning reel are there to connect the rod and allow it to move freely while hauling in your catch.

Features Of The Spinning Reel

The guides are like circles that sit at the top of the gear, running along the tip up to the handle. Reel guides on the spinning reel tend to be much larger than on the casting rod.

The rod line goes through each circle on the reel and helps hold the line in place close to the rod. The rod ends at the reel foot and helps tie the reel to the rod.

The guide on the reel performs similar to a funnel and assists in keeping the line steady as it comes off the reel. It also helps minimize any coils on the line, while maximizing how far you can throw the rod.

Therefore, the spines on the reel and casting rod must face the same direction to help the reel spin smoothly when hauling in a catch. Both parts must complement each other for the fishing pole to work efficiently.

To attempt to match a spinning reel on a casting rod may cause significant damage to your fishing gear. To avoid this mistake you need to know how each part works, and how they differ.

The casting rod sits close to the reel seat and the fingertip tends to be smaller. Parts of the casting rod may include the tip, reel seat, butt cap, hook keeper, windings and the handle.

The reel seat attaches the reel to the casting rod. It also comes with screws and a hood to help secure the reel foot. The windings are a type of string that helps keep the guides in place on the rod.

Anglers use casting rods to help attach the bait to the fishing hook. They help you control your casting technique and distance. Casting rods are ideal for casting heavier fish baits.

The casting trigger sits at the bottom, while the guide sits at the top. It also allows the angler to handle the rod more easily when casting into the water.

The spinning reel, on the other hand, anglers can operate by gripping the rod through the cast. The spine on the casting rods lie beneath the gear and are usually stiffer.

The Differences between Spinning Reels And Casting Rods

The spinning reel sits at the top of the casting rod. If they do not match, it can create a lot of loops when the line is coming off the reel. The casting rod would also cause some friction by making the line much straighter. It may restrict the ease of flow on the line and help reduce the casting distance.

If the guides on the reel are smaller, your casting and accuracy may be out of sync.

When contemplating using a spinning reel on a casting rod, it’s also important to understand how they operate.

Spinning reels are very easy to handle and are ideal for beginners. They are great for casting lighter fishing bait and longer distances.

Operators can twist the bail, keep the lead finger on the fishing line and cast it into the water. To close the bail, turn the handle and reel the line back in.

Casting rods are better suited for heavier fishing bait and may not be as easy to operate as the spinning reel. They also seem to require a lot more skill and practice when operating than spinning reels.

Anglers may have to exert more pressure on the spool as the line comes off. The rods also tend to create a lot more drag and backlash than spinning reels.

The line on casting rod also tends to launch much straighter than spinning reels. Anglers may have to regularly adjust the distance and casting accuracy to get the best catch possible.

Apart from looking awkward and working harder, the lines will run in opposite directions, causing much friction and possible damage.

link to Can You Fish on a Full Moon?

The phases of The Moon can affect fishing success. This is due in large part to how the moon affects the tides. However with the increase in light during a full moon, if in a cloudless sky of course,...

Continue Reading
link to What Is the Best Fishing Line For Walleye?

Walleye fishing line or leader should be monofilament or fluorocarbon of about 10lb test. Braid can also be used with leaders.