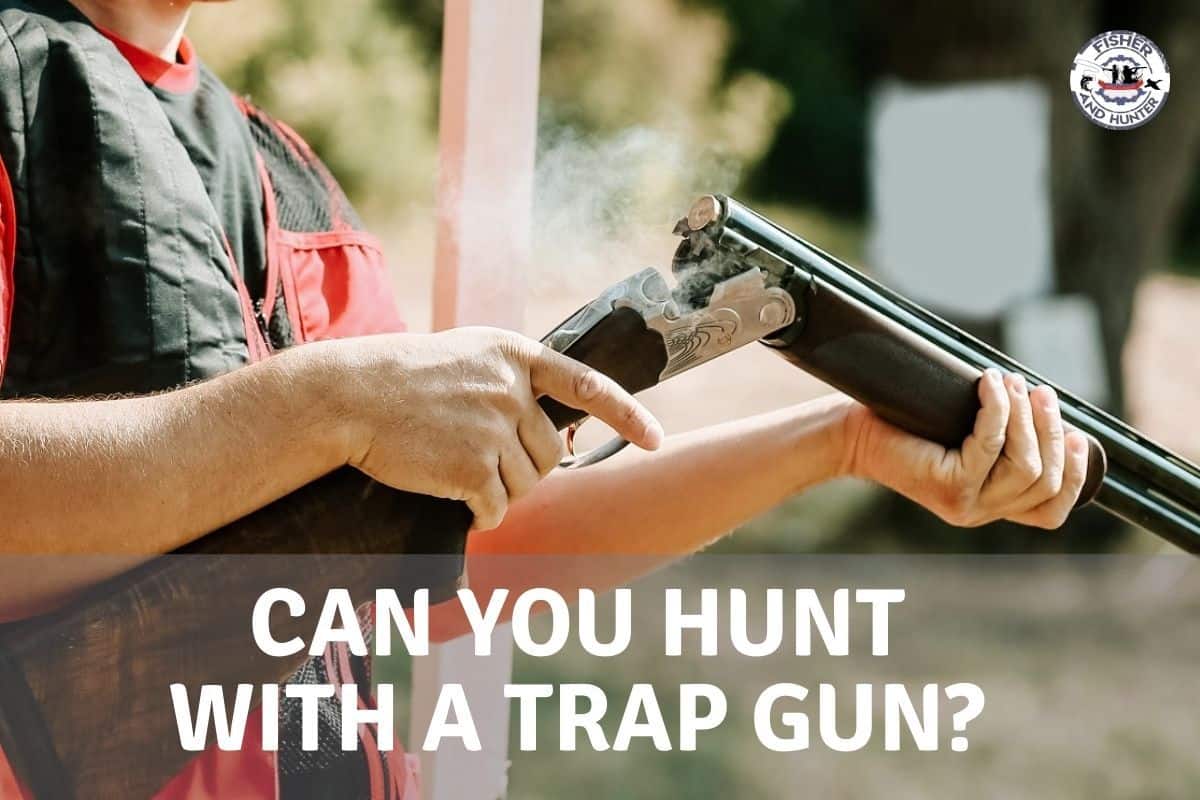 You can hunt with a trap gun, especially if you are familiar with shooting a trap gun. If you are more familiar with a field gun, you will have to compensate for the additional weight and length of the trap gun and the fact that it shoots high. The lack of a safety on many trap guns can be a concern.

Trap guns are built with target shooting in mind, so one would think that this would be no problem for hunting since hunting is also shooting a similar, moving target. However, there are more subtle differences between a trap gun and a field gun that may cause you to reconsider taking a trap gun out on a hunt!

How Does A Trap Gun Differ From A Field Gun?

Let’s take a look at what differentiates a trap gun from a field gun which will help draw the necessary conclusion about whether they will work for hunting.

Many shotgun manufacturers will make trap and field guns in the same model, with each gun built with the specific characteristics for each type of shooting.

People who only own a trap gun may wonder if a trap gun would be suitable to take on a hunt or if these differences between a trap gun and a field gun will pose any difficulties for them during a hunt.

Can You Hunt With A Trap Gun?

Whether you can use a trap gun for hunting will largely depend on what you are used to shooting and whether the characteristics of a trap gun make hunting more difficult for you or not.

It is certainly possible for you to hunt with a trap gun, and in some circumstances, you may find that a trap gun works better for you on the hunt.

If you are used to hunting with a field gun, and you change to a trap gun, you may find the differences between the two causing you to miss a lot of shots or the gun being cumbersome to carry and swing up for a shot.

Where a trap gun would be to your advantage is if you are already a seasoned trap shooter and are familiar with your trap gun. You will be used to the weight of the gun, the long barrel, and the gun shooting high, so you will not need to compensate for these characteristics of a trap gun since you are familiar with them already.

If you are a trap shooter, you would probably have more success on a hunt if you used your trap gun than if you swopped it out for a field gun that you are not familiar with.

The Additional Weight Of A Trap Gun

However, if you are hunting from a sheltered position or a blind, then the weight of the gun will be less of a negative factor in the hunt.

The Length Of Trap Guns

However, this characteristic of trap guns you can get used to with a little practice, but it may feel a little cumbersomeand unwieldy at first.

If you are familiar with your trap gun and used to shooting targets with the gun, then you will be used to the type of sight picture that you need on your trap gun to get the shot on target.

If you are not a practiced trap shooter, you may find that you miss your shots often when you aim a trap gun the same way that you aim a field gun. You would need to adjust your sight picture to get the necessary accuracy for a hunt.

Lack Of A Safety On A Trap Gun

Not all trap guns are without a safety, but the lack of a safety is common among these types of shotguns. This is probably the feature that is of greatest concern during a hunt since you are walking around with a loaded gun, ready for action.

If your trap gun does not have a safety, this would be the main aspect of the gun that should make you consider if the trap gun is the best choice for the hunt. An accident on a hunt can change your life forever!

Hunting can be a dirty business for both the hunter and his gun. Taking a gun out on a hunt is going to expose the gun to rough handling, dirt and grime, and the potential to get scratched and knocked about.

There are some differences between a trap gun and a field gun, but this does not disqualify a trap gun from being used successfully on a hunt.

If you are more familiar with shooting a trap gun, it will probably be the best gun for you to take on the hunt because of this familiarity. If you are used to shooting a field gun, taking a trap gun on a hunt will mean making some adjustments to your shooting technique and site picture, which may take some time.

The only characteristic of a trap gun that would exclude it from a hunt, in my opinion, would be if the gun lacks a safety. The risks of hunting without a safety are not worth taking, and it would be better to take a different gun on the hunt if your trap gun lacks this feature.

link to When Should I Use A Wire Leader – Saltwater Fishing

Continue Reading
link to Hunting Vs. Fishing Waders Is There A Difference?

Waders are made for different purposes, either fishing or hunting, but there are different types of waders for different conditions within each category. The question is whether these differences are...