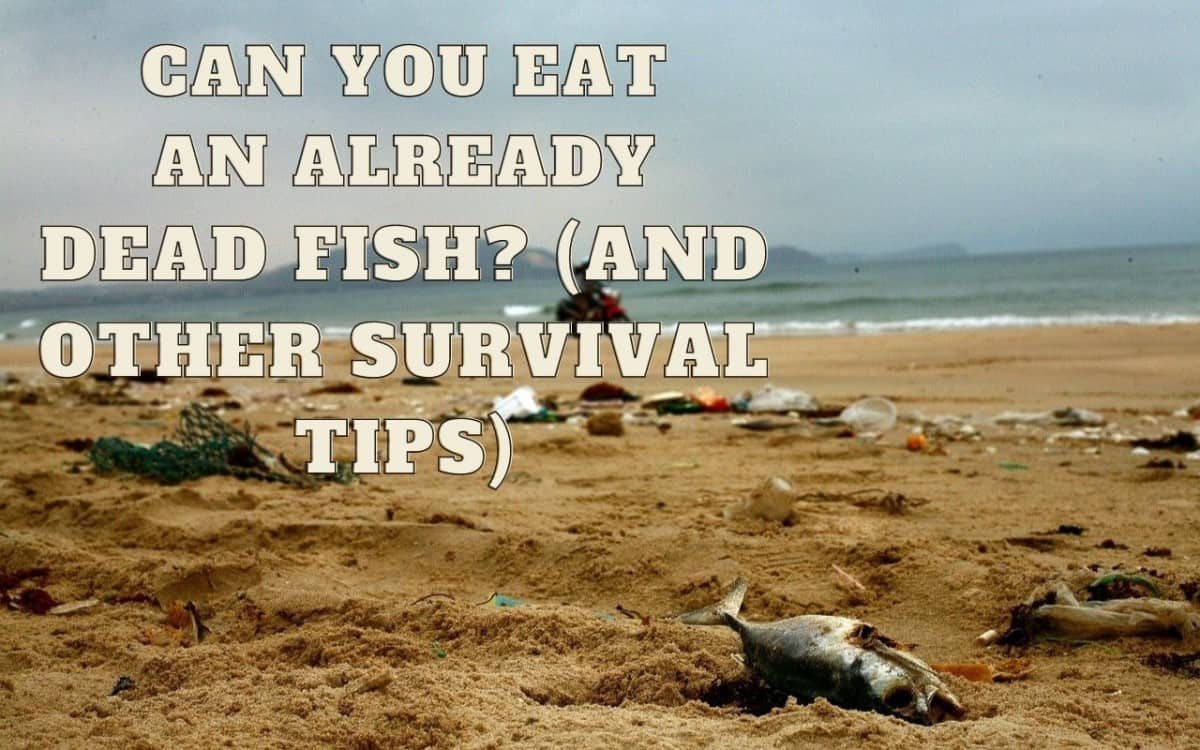 Survival is a situation that we prepare for and practice for and spend some time contemplating options should we ever find ourselves in this situation. Food is an important part of our requirements in this type of circumstance and will give us the energy we need to continue our survival efforts and manage to self-rescue or wait long enough to be rescued. Foraging for food is a crucial part of finding nourishment, but can you eat something killed by another animal. Can you eat a dead fish?

It is not safe to eat a dead fish. It is highly dangerous, especially in survival-type situations. Dead fish harbor bacteria, parasites, and disease that can make you very sick and even cause death. The only possibility would be a fish that a predator has freshly killed, but there are still significant risks.

Being in a survival-type situation will result in us being called upon to do things that we would not normally consider in normal society. In fact, we may need to do things to survive that would even be frowned upon or advised against in normal life. The need for fuel for our bodies can push us to try to eat things that we would normally never consider putting in our mouth, never mind swallowing! How does this relate to eating leftovers or dead animals that we find in the wilderness?

Is It Safe To Eat A Dead Fish?

If you find yourself stranded in a wilderness area where there is a body of water, it is a good situation to be in. The water has the potential to provide you with something to drink as well as something to eat.

Fishing is a way to get food from a lake, dam, or stream, but what if you do not have any equipment to fish or the means to make tools to catch your own fish?

Walking around the edge of this body of water, you could discover the remains of fish on the banks that may lead you to wonder if you could eat this meat.

Finding a dead fish at the water’s edge could be a great find that could provide you with a nourishing meal, but it could also have some dire consequences, especially if you are out alone in the wilderness.

Before you consider the dead fish to be a suitable meal, you should examine the evidence carefully to determine if the fish is good to eat or will cause you even more problems.

There are a few signs that you can look for that will help you to establish if the dead fish that you found is suitable to eat without making you sick and making a serious situation even more so.

How Long Has The Fish Been Dead?

Fish is a meat that starts to deteriorate very quickly when the raw meat is exposed to heat and the elements. Fish that has begun to rot can cause a serious case of food poisoning which can make you really ill and weaken your body even further.

There are some telltale signs that the fish has been dead for some time and should not be considered as survival food.

What Was The Cause Of Death Of The Fish?

Death By A Predator

If the fish has been killed by a predator, there should be obvious wounds on the fish. Bears, alligators, and birds of prey are examples of animals that may wound a fish that later dies from its injuries.

Once again, you need to examine the carcass to try to establish how long it has been dead. A fish that has been recently killed by a predator, preferably within an hour or two of you finding it, would be suitable to risk eating, but only in a very desperate situation.

You could remove the portion of the carcass where the predator has eaten or damaged the fish, and the rest of the carcass should be good for you to consume.

This is providing that the fish has not been dead too long. Follow the steps to check for the time of death of the fish.

If you really need to scavenge, the best scenario would be if you saw the predator catch the fish. You would then be absolutely certain about the time of death of the fish and the condition that it was in.

If the fish is very fresh, then take care; the predator may still be in the area, and if it is a bear or an alligator, you don’t want to be surprised by them still being in the neighborhood.

If the fish has died due to disease, it will usually be obvious from the state of the carcass. The fish would not be in good condition, and there would be indicators on the carcass of illness like the fish being thin and malnourished or the flesh starting to degrade and not much meat on the animal.

In this case, it would not be advisable to eat the fish. The disease could have been the result of a parasite, bacteria, or virus, which could still be in the meat of the fish and cause you to become sick should you eat it.

If the water is not clean and is stagnant, the fish may have died from the contaminants in the water. If the water is contaminated by a pollutant, you will probably find more than one dead fish on the banks of the water.

Fish that have died for these reasons are not worth the risk to eat. The contaminants in the water would have penetrated the meat of the fish and could pose a health risk for you.

Should You Cook A Dead Fish?

If you find a dead fish that is suitable to eat, it would be wise to take the additional precaution of cooking the meat if possible before eating it.

This will give you the added protection of the heat killing any bacteria or parasites that may be in the meat of the fish. The heat will, in effect, kill these micro-organisms in effect sterilize the meat, making it safer to eat.

Rotten fish, or fish that has started to decompose, should not be eaten at all. The decomposing proteins can produce toxins that the heat of cooking will not break down.

However, if you have the means to make a fire, you would have the tools to make your own fishing equipment to be able to catch your own fresh fish. This would be the preferable and safer survival route.

Of course, the question can you eat a dead fish is a little of a misnomer. Yes you can, but can you eat one you have found. Well no, not really. However if you catch and kill your fish you are going to need to store them and get them home. We have a cheaper Columbia version as its lighter weight an still can hold about 50 cm long fish ( we don’t often get anything bigger than that!!) If you want to know more cooling options we have a catch cooler article here.

Eating a dead fish is a very risky business. Finding a dead fish is best viewed as an indicator that there are fish in the water, and you could make better use of your time by fashioning a way to try and catch fresh, healthy, live fish that would not pose the same health risks of a dead one.

The only time that it may be worth the risk is if you have seen a predator, such as a bear, catch the fish, and then you take the remains, but even this would be a risk.

Personally, insects and plants would make a better choice for foraging for food for survival since there would be much less risk of food poisoning or contracting a serious illness in an already desperate situation.